Is The AFENDO 18000mAh Car Battery Jump Starter As Smart And Helpful As Advertised?

This product is no longer available. You can find similar items here. 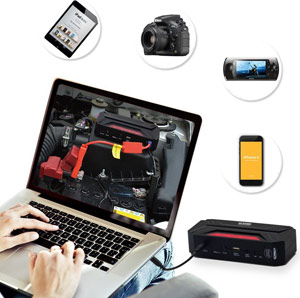 The AFENDO 18000mAh 600 AMP Peak Heavy Duty Car Battery Jump Starter is listed as being a “unique” model and it is not hard to see why when looking at its design; where many designers stick the heavy, bulky design of most jump starting units, this one has a streamlined approach and compact shape with minimal extra parts.

It may be compact but there are some strong sales claims with this product that help it appeal to vehicle owners, such as that it is still strong enough to start light to medium trucks and SUVs and has other capabilities to add to its functionality. Is this device as strong and versatile as hoped for?

What benefits have buyers mentioned when reviewing this AFENDO 18000mAh Jump Starter online?

Starting with this idea of having the strength to power plenty of different vehicles, there is definitely the potential with the 18000mAh capacity of the battery pack and the 600 Amp Peak. There are plenty of positive reports from buyers about the power offered, as cars and trucks are being started up with relative ease and speed, it came already charged and it seems to be reliable.

Additionally, this AFENDO 18000mAh 600 AMP Peak Car Battery Jump Starter has smart power technology to ensure that the current is managed correctly – no surging or overcharging.

As for the versatility, the use of the external battery charger means that it is not just cars that can be charged here, as phone and laptops can also be powered through the USB port, and there are some other interesting features to aid users, such as the intelligence to recognise the device that is plugged in.

Some have said the charge offered to laptops doesn’t always last very long but the option does work. The built-in signal light is another nice touch for users on a dark roadside as it not only has a strong LED output for illuminating the job but also sends out SOS strobbing to signal other motorists.

Are there any downsides to using this AFENDO 18000mAh Battery Jumper Unit?

Criticism of the unit is hard to come by and, apart from those odd reports on charging issues, there is little of concern. Some buyers have questioned whether the connections for the leads and adaptors could be a little tighter for greater peace of mind while other have commented on the excessive size and dubious durability on the storage case, which may have a negative impact on the much more rugged unit.

Summary: with such minimal negative feedback for this AFENDO Car Battery Starter, it is a recommendable purchase?

This is a very interesting product for many consumers that worry about finding themselves stuck on on the roadside with a dead car battery and dead phone because not only does it offer the chance to charge both through a fairly simple, compact device, it has more intelligence and interesting features than other models to enhance its suitability.

The AFENDO heavy duty jump starter may not have the most secure case and connections but it is still reliable enough for most jobs, has that great versatility and LED lighting and, most importantly, is appreciated by a large number of motorists.