A Brief Introduction of the Jump-N-Carry JNC950 Jump Starter 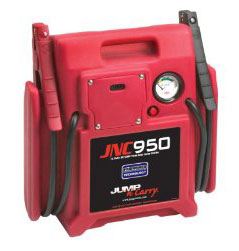 If you are in the market for a powerful portable jump start device, then the Jump-N-Carry JNC950 2000 Peak Amp 12V Jump Starter is one of the great device to consider. It has a pre-built 2000 Peak Amps that can be utilized to start power.

The battery jumper has the capability of spinning the starters of one six commercial trucks. For more aggressive moveable users, the Clore PROFORMER battery comes in handy.

Furthermore, is has an on-board automatic charger with the capacity to offer continuous charging throughout the whole day.

Whereas, the Jump-N-Carry JNC950 car jumper is slightly big, it is comes in handy when you want to operate a portable cooler or related electrical components for at least eight hours.

If you are the type who is always on the road, you can use the device to charge your portable cooler so as to avoid depleting the car battery when it’s parked at night. This way, you will always keep all your drinks and foods cold and fresh during the entire time of the journey.

Recharging the JNC950 jump starter is not that hard at all you only need to connect it to a mains power source for a couple of hours. The same can be used by shopping malls to assist shoppers whose car batteries have stalled to jump start their cars.

The best thing about this car jumper is that it is compatible with most jump start packs. In addition, the battery can easily be replaced when it cannot hold charge anymore and as such saving you the need to purchase another jump pack. 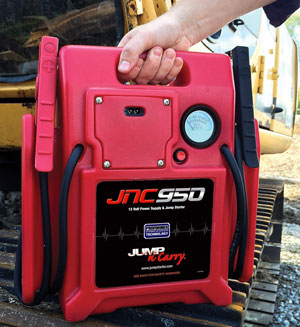 By virtue of design, the Jump-N-Carry JNC950 battery jump starter can be used in different areas and as such has been received quite well by a majority of users.

For example, Jump-N-Carry is used by car dealership owners since it can start any type of automobile. In addition, the pre-built cigarette lighter makes it easy to use the battery jump starter for a wide range of purposes.

One of the most alluring features of the JNC-950 battery jumper for some customers was the automatic charge feature. This enables them to plug the device to a mains power supply when not in use without having to worry about overcharging the jump box.

The weight also makes the JNC950 box more portable than other jump boxes in the market. Furthermore, the inclusion of a battery made some customers prefer the Clore Automatic Jump-N-Carry to other brands as it saves them the additional cost of buying one.

For those who like to tour the country in their RVs, they found the Jump-N-Carry JNC950 jump starter more convenient as it offered them an alternative for a 12 VDC supply. In addition, it acted as an emergency jump start unit whenever their car batteries ran low.

Surprisingly enough, police officers found the Jump-Carry quite useful given the number of electrical devices installed therein which can deplete the car battery when left on.

However, there were a few complaints here and there from a few customers. For instance, there are those who found the 34 pound weight a little bulky to carry especially when they needed to carry it to a mains power supply unit to recharge.

The one thing that has stood out is that the device is quite dependable. Not so many car owners understand that installing a lot of electrical gadgets in the car affects the battery performance. But, if you have the Jump-N-Carry jump starter you do not have to worry about being caught pants down with a depleted car battery.