Is There More To The Jump-N-Carry JNCXF X-Force Jump Starter Than Just Being Simple And Reliable? 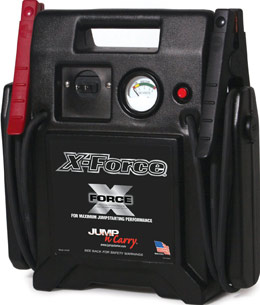 The specification of the Clore Automotive Jump-N-Carry JNCXF X-Force 12V Single Battery Jump Starter is quite simple because beyond the powerful jump starter, cables, hot jaw clamps and automatic recharging there is little else to say.

The biggest sales claim with this model is that it is up to the most “demanding jump starting tasks in automotive, fleet, construction and industrial environments”: is this really the case and is there more to this product than there appears to be.

What positive elements have users mentioned in their reviews for this Jump-N-Carry Jump Starter?

Starting with the power, this Jump-N-Carry JNCXF X-Force 12V Single Battery Jump Starter is advertised as having an “extreme” starting power with 770 crank assist amps and buyers are impressed with the way that it can start up a completely drained battery almost immediately, kick-start multiple vehicles on one charge and even bring new life to something as big an an 18-wheeler truck.

Moving on to the design, there are three key features here. The majority of buyers highlight the fact that it was made in the USA but it is the length of the cables and the dimension of the unit that are more impressive. 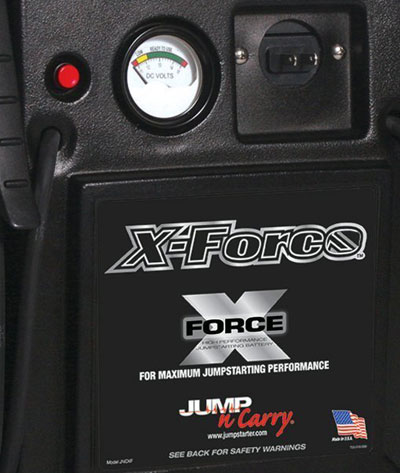 The cords are extra long for a greater reach and are said to be more flexible than other examples buyers have used while the unit is slimmer and taller than the average jump starter, making storage and transportation a lot easier.

The JNC X-Force Jump Starter seems to cover all the bases so far so are there any problems for prospective buyers to be aware of?

One of the noted downsides to this JNC jump starter is that there is a lack of features but this can also be seen as a benefit according to some.

One the one hand, this lack of features simplifies the product nicely and ensures that it just does the job it was designed for in an efficient manner. On the other, it does mean that some of the tiny considerations and helpful tricks seen in other models cannot be enjoyed.

There is also the issue of the price but, yet again, this has people sitting on different sides of the fence. It is more expensive than some other brands, with less in its specification for the privilege, but its supporters say that it offers a better, more reliable performance and that they are therefore happy to have paid a little more for what they got.

Summary: does this lack of problems mean that this JNCXF X-Force model is a great purchase?

In the end, the fact that there are so few flaws to mention and that so many buyers can see past these minor negative points means that it is impossible not to recommend this product.

The Jump-N-Carry battery jumper may be a little more pricey than some of the other brands around and it may not have lots of weird and wonderful features to play with but the convenience of the design consideration and the ability to start cars of all types with ease mean that these minor drawbacks aren’t so bad.